Part 1: Complexity of the Real World Has Outpaced the Myth of the Linear Method

Dr. Russel Ackoff spoke often of how we were prepared to deal with the real world in school. We were usually presented with a “case study.” We would then busy ourselves in reading and developing ideas around the case study. We would then turn in or present the case to the teacher for a grade. Ackoff noted that in the real world, problems do not come in the form a case study, but as a “mess.” Part of our journey is understanding the mess and developing a statement of the challenge.  Laurence J. Peter warns us in the quote:
“Some problems are so complex that you have to be highly intelligent and well informed just to be undecided about them.”
The challenge before most of us trying to make improvements is the complexity of environment in which we are working. Systems that are not closed but open systems that are dynamic accompanied by influences for which we may or may not be aware. Ramo (2016) draws the distinction between complicated and complex systems:
Complicated mechanisms can be designed, predicted, and controlled. Jet engines, artificial hearts, and your calculator are complicated in this sense. They may contain billions of interacting parts, but they can be laid out and repeatedly, predictably made and used. They don’t change. Complex systems, by contrast, can’t be so precisely engineered. They are hard to fully control. Human immunology is complex in this sense. The World Wide Web is complex.
Complicated systems have the property of being closed systems, while complex systems operate in an open environment that is very dynamic. Many of us working to make improvements in our organizations can relate readily to the idea of complex system. Into this fray, many of us are given problem solving methods that are linear. We are presented with the idea that if we follow the method, we will be led to a solution. Dr. Jeff Conklin presented some research around the so-called “Waterfall” method commonly used to develop software. Figure 1 describes this method:
Figure 1: Waterfall Method of Problem Solving 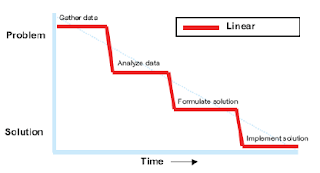 In this method, we are to gather data, analyze the data, formulate a solution and implement the solution. How does the real world react to this linear path? Conklin then presented the experience of one designer following the method. Figure 2 describes how the perception of the designer vacillates from problem to solution over the course of using this method:
Figure 2: Waterfall Method with One Designer 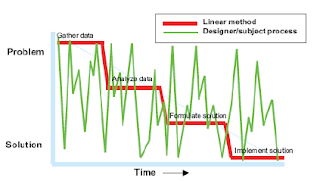 Conklin referred to this vacillation as a “wicked journey.” If you have worked on an improvement effort of any complexity you can appreciate this journey. One day filled with hope and a solution, the next day, frustrated by an unintended consequence of your change, you are now faced with the challenge to adapt to the new circumstances you are facing. More work to do!
Life would be good if we could handle complex challenges by ourselves (the lone designer) as in Figure 2. Complex challenges usually require subject matter knowledge of other people. What happens as we add other people? Do they share our perceptions of the problem and solution? Figure 3 describes the journey with two designers:
Figure 3: Waterfall Method with Two Designers 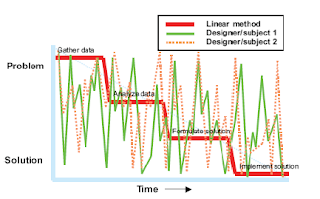 From Figure 3, we can readily see the perceptions between the two designers track at times and are very different at other times. For improvement teams, we usually have 3-5 people on a team. Conklin refers to this addition of people as “social complexity.” Personality intelligence tells us that people are very different. Their perceptions of the same events, data, etc. may be very different given how they learn and their subject matter knowledge.
We had an improvement team in an international tech company that used a method called Understanding, Develop Changes, Test Changes and Implement Changes (UDTI). Within each of the defined phases the Plan-Do-Study-Act (PDSA) cycles were utilized. The team referred to their journey as “wicked.” Figure 4 describes this team’s journey:
Figure 4: Using UDTI with PDSA Cycles to Make an Improvement 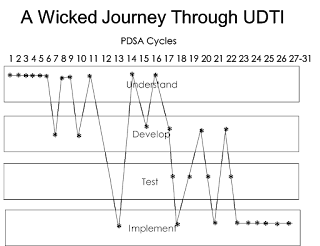 In following the PDSA cycles in the figure, you can imagine the frustration of the team in PDSA 12 when a rush to implementation led to failure and required a visit back to the “Understand” phase. After this learning, testing was always done before implementation. The six cycles of implementation at the end were the spread of known changes to other regional groups.
What is the downside of the vacillation between the stages of the linear method? When an improvement team discovers an unintended consequence of a test, they must go back to a prior stage of the linear model, many see this as a failure.  Experienced people with improvement efforts understand that when addressing complex challenges, learning and unlearning are natural parts of the journey. However, the same organization that used the UDTI method had one team in Europe that eliminated all the failed PDSA cycles of the improvement journey, forcing a perfect match to the method. Unfortunately, this sort of practice, while helping self-esteem has nothing to do with the science of improvement.
People who use such linear methods often discuss the vacillation of the hopeful path. One of my colleagues is looking for the first project of any complexity that follows such a method. So far, we have not found one. Margaret Wheatley once commented on why the myth of success with linear methods continues: “After the fact, people usually report their journey by the prescribed method, thereby reinforcing their use.” Dr. Jeff Conklin and the UDTI team have given us some insight into use of such methods as they encounter a world of complexity. Hopefully, we won’t be surprised when the real world does not cooperate.
In Part 2, we will examine some methods based on the science of improvement. The importance of questions in addressing complex systems and help in addressing the social consequences of technical change.

References:
1.       Conklin, Jeff, Wicked Problems and Social Complexity (2008); This paper is Chapter 1 of Dialogue Mapping: Building Shared Understanding of Wicked Problems, by Jeff Conklin, Ph.D., Wiley, October 2005. For more information see the CogNexus Institute website http://www.cognexus.org. © 2001-2008 CogNexus Institute. Rev. Oct 2008.
2.       Ramo, Joshua Cooper. The Seventh Sense: Power, Fortune, and Survival in the Age of Networks (p. 137). Little, Brown and Company.
3.       Leadership and the New Science, Margaret Wheatley, Berrett Koehler Publishers, San Francisco, 1992. Note: In searching this book, we were not able to locate the quote from Wheatley. In communication with her staff, we were told to attribute. The reader may find this reference useful. Find Part 2 here


Acknowledgment
Jesse Trevino and Jane Norman offered comments to make this more readable. Many thanks. Ron Moen added suggestions for including Deming’s concepts of enumerative and analytics studies. Bruce Boles, Jonathan Merrill and Dave Hearn reviewed. Many thanks to all for the help!
Posted by Clifford Norman at 2:40 PM